Just over two-thirds of consumers globally (67%) now expect bricks-and-mortar retail stores to accept contactless payments and just under half (44%) wouldn’t shop at a store that only offers payment methods that require contact with a cashier or shared device, a survey of merchants and consumers in nine countries around the world has found.

The fifth edition of The Visa Back to Business Study also found that 68% of consumers say that the Covid-19 pandemic has permanently changed how they make payments “with a preference on safer and touchless ways to pay” and that 60% expect to use contactless payments whenever possible in the next three months.

The survey also shows regional variations, with 73% of consumers in the United Arab Emirates saying they would not shop at a store where contactless payments are not accepted compared with 30% in Russia.

The percentage of consumers expecting retail stores to accept contactless payments also ranges from 54% in the USA to 69% in Germany, 74% in Russia, 75% in Canada and 82% in Ireland. 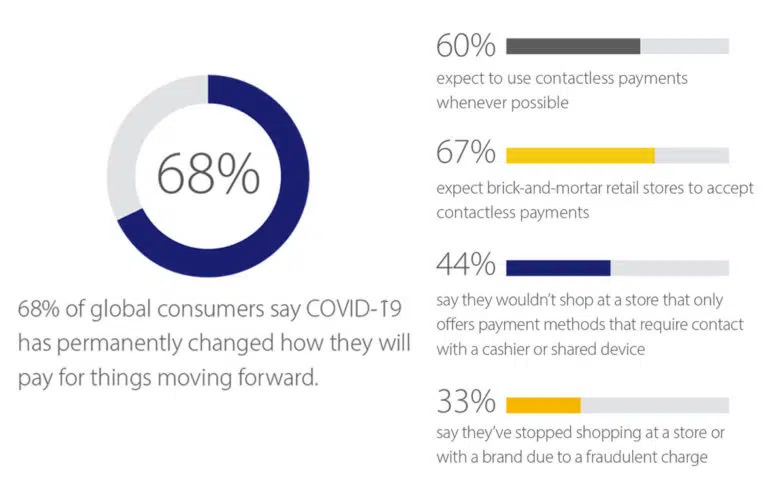 “The pandemic has dramatically increased consumers’ concern with touching cash and payment readers and correspondingly increased the desire to tap and pay,” Visa says.

“Stores that don’t accept contactless payments could run an increased risk of losing customers as a result.

“Previous research from Visa also found that, of the UK small businesses surveyed which were confident of bouncing back from the pandemic, two thirds (67%) said that their in-store experience for customers has improved due to the acceptance of contactless and digital payments.”