Vietnam has recorded the highest growth in mobile payments in the past year, according to research by PwC.

Singapore also saw strong growth, climbing 12 percentage points from 34% in 2018 to 46% in 2019. PwC says this highlights how efforts by mobile payments companies and its government – which began paving the way for digital payments in late 2017 – are paying off.

PwC’s Global Consumer Insights Survey 2019 found that the percentage of consumers paying by mobile in Vietnam has increased to 61%, up from 37% in 2018. The 24 percentage point increase was also the largest of the six South East Asian countries that took part in the global survey. 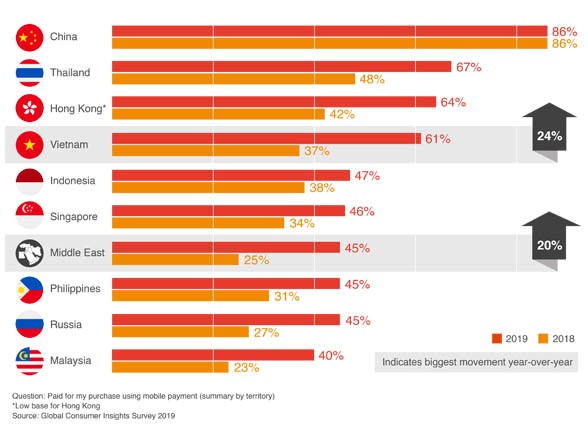 In the Middle East – which has the second-fastest growth in mobile payments adoption globally after Vietnam – usage increased by 20 percentage points to 45%.

China remains unchanged at 86%. Across all territories, 34% of consumers paid for purchases using mobile payments, up from 24% a year earlier.

“Vietnam, with its relatively low penetration in 2018, has registered the highest growth as mobile platforms demonstrate a significant increase in convenience over traditional means of commerce. This contrasts with Singapore, which also shows strong gains.

“However, the sophisticated and established traditional ecosystem, as well as abundant and potentially confusing number of choices in mobile payments, can also slow down adoption.”

He adds: “This finding highlights a timely confluence of four principal factors: stages of economic growth cycles driving affluence and disposable income; the availability of platforms that address local demographic needs including support for cash-on-delivery; the lower cost for retailers and providers; and a marked increase in convenience.”