Smartmetric Inc., a manufacturer of biometric, fingertip-based credit cards, said that its biometric credit and debit card — slated for release in early 2020 — now has a battery shelf life of over nine years. 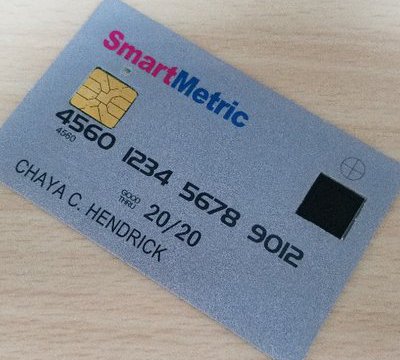 “This means the card can stay unused by a user for a long time and when they go to use the card it will power up immediately; the user simply touches the card’s sensor,” Chaya Hendrick, Smartmetric’s president and CEO, said in the release.

Smartmetric, which is based in Bay Harbor Islands, Florida, said it has also made advances in its contactless NFC technology, which is activated for contactless transactions following the users instant fingerprint scan and match when they touch the biometric sensor on the card’s surface.

The card’s internal biometric scanner is powered by a thin rechargeable battery. The battery gets recharged each time the card gets used at a card reader.

The card will incorporate the operating system and payments chip of a “major global payments card chip supplier,” the company said. It will offer the card to more than 500 credit card issuing banks that are already using the chip supplier’s chip in their cards globally.